Bruce Bochy became only the 11th manager in MLB history to win 2,000 games. He will be sorely missed as one of the greatest coaches in Bay Area history. He is a certain Hall of Famer.

We weren’t sure if it was going to happen, but it did. Bochy reached 2,000 wins in his managerial career, with the help from a certain Yaz. Chad and Eric talk about Bochy’s magical milestone and the week that was in Giants’ baseball. Yaz hit a homerun where his grandpa hit homeruns. A rookie won in Atlanta where the veterans couldn’t.

Changes to the park are afoot.

Chad will be at Oracle Park on Wednesday against the Rockies with @SportsHosts. They have $9 tickets for Wednesday night. Reserve your tickets at http://www.sportshosts.com.

Episode #172: Bustering out of the Break

The Giants have won 9 of 11 and lead MLB in homeruns for the month of July with 22. You read that right. They lead the league in homeruns this month. Did this team find their true identity, or is this just a phase like a cranky teenager going through a growth spurt? Eric and Chad talk about the series win in Milwaukee and recorded this during the Giants’ 19-2 demolition of the Rockies in the first game of their day-night doubleheader today.

Andrew McCutchen had some great stories at Media Day, including how he met his wife and how he got his number, 22. Photo: SFGate

We last left you before Media Day, before pitchers and catchers reported, before Tony Watson and Derek Holland were signed. And man, does everything seem positive right now!

There was a profound sense of positivity at Media Day, where I got interviews with Evan Longoria, Brandon Belt, and Brandon Crawford, along with group interviews with Andrew McCutchen and Bruce Bochy. But…I buy into it. This isn’t your typical response from a team that lost 98 games last year. They truly think that was an anomaly, and with the improvements to the club, these guys think the postseason is certainly possible. I think I’m buying into it.

Eric and I talk about this and the first six games of spring training, which included three bombs from Kyle Jensen?! Ok, so although he’s not making the team, we still talk about him and other solid performances over the first week down in Arizona.

Timmy signs with Texas?! At least he’s not a Dodger.

Also, check out Eric’s great writing on our site, he’s gonna manage a team website at some point, or get caught in a sex scandal when he’s made it. Either way, that’s more than I can say.

I went up to AT&T Park today for Media Day. It’s an annual pilgrimage for me, as it’s a casual, relaxed atmosphere on the suite level. The big names get whole suites to themselves, while most of the other players and coaches are crammed into couches and small cocktail tables with the name placard in front….it’s an odd kind of “speed dating” type environment.

All of the interviews are listed below in audio form, and additionally, in video form for Longoria and McCutchen.

Episode #133: Pitchers and Catchers are Reporting…Soon!

It’s true, the Giants’ pitchers and catchers are reporting in less in a week. A few mere days until we can claim that we smell the fresh cut grass and hear the crack of the bat echo through our collective skulls.

Until then, Eric and Chad talk about Barry Bonds’ #25 being retired in August, despite not being the Hall of Fame (a Giant requisite for a retired number), the clash between the MLB players’ association and MLB about the lack of free agent signings, Chad will be covering the Giants at Media Day on Friday, and Eric has been writing a metric ton on torturecast.com. Seriously. Go there. Read it. It’s good stuff!

Check out our audio interviews with seven Giants from this weekend (ok, Bochy is just video). The consistent theme is that there is hope emanating from the back of the pen, namely the new closer, Mark Melancon. He was so chill, I thought perhaps he was on performance depressants.

You can catch almost all of these interviews in their video format (plus or minus a few minutes) here.

Exclusive Player Interviews…and some not so exclusive interviews…

Yesterday was a very productive day at AT&T Park, as I grabbed quick group interviews with Buster Posey, Brandon Crawford, Hunter Pence, Matt Moore, Bruce Bochy, Jeff Samardzija and the new closer, Mark Melancon. All but Samardzija (audio only) are in the YouTube playlist above.

Now that FanFest is over, and spring training is about to start, just sit back, relax, and see what your some of your favorite Giants have to say about the upcoming season.

Torture Never Sounded This Good (well, at least these Giants’ interviews are cool) 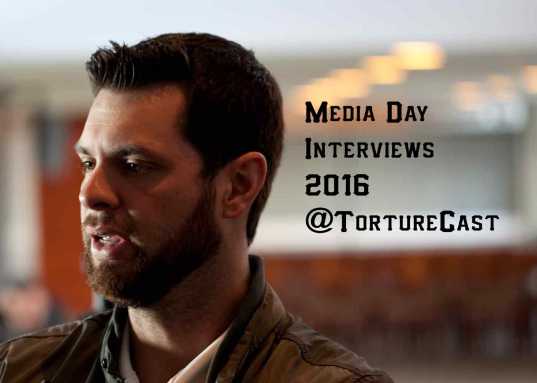 (cue Barry White)….You just might love the Giants more than your S.O., bae, or discreet one on the side, but even if you just kind of lust after the Giants, why not spend Valentine’s Day listening to Buster Posey whisper about the DH, or Hunter Pence profess his love for dogs. Perhaps a little bed talk about sore backs with Joe Panik is your thing. Whatever it is, Posey, Panik, Pence, Belt, Crawford, Cain, Duffy or Tomlinson, you’ll find it in our TortureCast interviews from this weekend. Because after all:
torture never sounded this good….

The wonderfully talented Veronica Belmont joined me at AT&T park today to interview as many San Francisco Giants players as possible. No, we couldn’t interview them all, but we did make it through eight of the more important Giants: Buster Posey, Matt Cain, Brandon Crawford, Brandon Belt, Hunter Pence, Joe Panik, Matt Duffy, and Kelby Tomlinson.

I COULD list all of these interview separately below, but it’s after 1 AM, so I’m going to just give you the link to the interviews of Podomatic. Because

It’s been a while, but the boys are back with the first podcast of the 2013 regular season.