“The Color of Willie”

Willie was recreating his vision of “The Color of Money” at a local SF pool hall and brought his jubilant intoxicating personality onto Episode 32 of “The TortureCast.”

We talk World Series 2010 rematch with the Rangers and 2 shutouts, Lincecum’s woes (and their amazing record without him), Panda’s return, “The Riot” is on fire, Vogelsong is da man, and overall the Giants are actually in a pretty good place. Listen to the decline in Willie’s attitude and rants about Lincecum and rude fans, he cares about the children, really, listen to it, it’s worth it.

The Week In Review

Also, catch up on a Lincecum article Chad wrote earlier this week.

As the sky is rapidly descending in the Little Chicken world of Lincecum-Land, I wanted to take a deeper look at exactly, er, statistically, anyway, what is going on and perhaps surmise a reason as to why the “ace” is struggling so mightily this season. Typical explanations that I hear on the crazy train that is the KNBR caller populous are velocity and location. I think velocity has very little to do with his current struggles. Yes, his fastball is averaging 90.2 mph this season, down from 92.2 in 2011 and 91.2 in 2010, but he was touching 93 yesterday against the Padres. I think his velocity comes and goes by start but doesn’t have a real net affect on the outcome as much as his ability to locate his pitches. His walks per 9 IP and walk average is way up, which suggests lack of command, and that lack of command will not only translate into walks, but also pitches over the middle of the plate that were originally intended to catch a corner or drop low (see 0-2 counts on Carlos Quentin, Tony Gwynn Jr., etc. for less than optimal results). This has resulted in a much higher batting average against, hits per 9 innings, and even batting average for balls hit in play, being way above the league average (see those purty graphs below for my attempt to convince you that I know what I’m talking about).

They are just lines, people 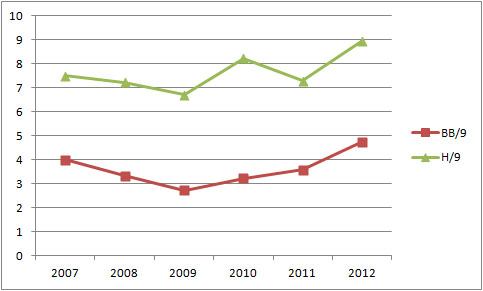 Some lines going up are good, however, these particular lines…not so much

But wait, what is this graph? LOB%? Is that how often he lobs the ball to his opponent? 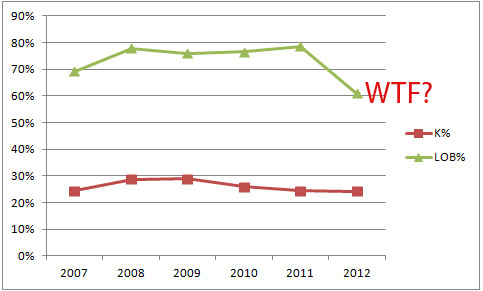 Timmy, that green line’s a little too sloped there…bring it up a bit, will ya?

No, although his performance may indicate that he’s doing that more often; this shows how many runners he leaves on base. LOB% and ERA are inverse of each other, as one rises, the other falls; the lower the LOB%, the higher the ERA. The funny thing is, historically, pitchers with high strikeout percentages will have higher LOB% as they can limit the number of scoring opportunities via sac flies, fielders choices and the like. Timmy’s strikeouts have barely dipped, still averaging 24.1% (24.4% in 2011). Yet, his LOB% has absolutely plummeted to 60.9% what FanGraphs calls “awful.” This dramatic drop is out of proportion to the drop in his other stats. The league average over the years is 72% and Lincecum’s lowest LOB% is 75.9% in 2009.

What can be attributed to such a monumental drop in LOB%? I believe it’s the all too frequent “big inning.” He has allowed 3 or more earned runs in one inning in 8 of his 12 starts. You know that old saying, “pitcher X scattered 8 hits and 4 walks over 7 innings?” Well, Timmy doesn’t “scatter,” he “lumps.” Unfortunately, these big innings unravel faster than my toddler’s temper tantrum when he doesn’t get his lollipop. He can be cruising and just completely run into a series of walks, a couple of bloops, and then a bomb, all in a series of 4 or 5 hitters. Take a look at his game log by start and inning. I’ve highlighted these “big innings,” which have accounted for 30 of his 43 earned runs. To put another way, he has given up 70% of his earned runs in a total of less than 8 of his 66.1 innings pitched (several of these starts he didn’t even finish the “big inning”).

The bottom line is that the Giants are now 2-10 when Lincecum starts, including 7 consecutive losses. They’ve only lost 25 games this year.

He said yesterday that he might be pulling out of his funk, but until he can prove it by avoiding a string of mental lapses that lead to these big innings, I’m not buying it. Maybe they should let Timmy smoke? More Giants fans are probably doing so now.