Once in a Blue Moon a Giantsy trade happens

Was this deal you expected? Were you like me and holding out some rare hope that the San Francisco Giants would land David Price or Cole Hamels? Trading for Mike Leake from the Cincinnati Reds was an extremely Giantsy thing to do. He’s not the splashy front end starter type. Just a good, solid pitcher in his prime pitching years entering a rotation that has its home games at one of the more pitching friendly ballparks in all of baseball.

The price for Leake was not as steep as it would have been for one of the big names out there. The Giants gave up minor league RHP Keury Mella, and corner infielder Adam Duvall. Recently Mella played in the futures game over All-Star weekend and MLB.com rated him as the top prospect in the Giants organization. Duvall is a guy that needs to find regular playing time and there is no way he’s cracking that Giants infield any time soon. If the Reds want to get him at bats it may in the outfield. Duvall had 26 home runs and 25 doubles for Sacramento this season.

I liked Duvall as a Giant. He helped the team win a title last season. I love the fun fact that Adam Duvall’s first career hit was a home run off Mike Leake. By parting with Mella the Giants proved they feel comfortable with their organizational pitching depth. Tyler Beede, Phil Bickford, and Kyle Crick are probably at the top of the list now. Beede could be a part of the 2016 rotation.

This also means that Andrew Susac stays around. It’s clear there is no other player out there the Giants feel they need to trade for at this moment. Of course I wouldn’t argue with Aroldis Chapman coming to the Bay Area, but I don’t run the Giants or Reds. This is one of the best offenses in baseball and if they need to add depth to the bench it could come sometime in August by claiming a guy off waivers.

Tim Hudson is the odd man out in all this. He’s said that he’d accept a spot in the bullpen for the Giants. That starts another set of dominos. Who goes? Is it Yusmeiro Petit? It’s sure not Ryan Vogelsong who has been lights out since going back to the pen. We’ll see sometime today if Hudson heads to the DL or the bullpen.

I don’t know about you but I’m already thinking about Madison Bumgarner, Chris Heston, and Leake at the top in a playoff series. Every time one of those guys takes the hill it feels like the Giants have a chance to win that game. We’ve learned over the last few years that chance is the most important thing. Jake Peavy did the same thing in his start Thursday.

It’s crazy to think that Matt Cain is the biggest question mark in the rotation right now. Those words are strange to type. In fact typing Matt Cain’s name at all lately has been rare. He’s been missed and I hope he picks up where he left off at some point.

Wendy Thurm shared how Leake stacks up in the Giants rotation. I peeked at Brooks Baseball and it looks like Leake is relying on his Sinker and Cutter more than any other pitches lately. He throws one of those 2/3 of the time. It indicates he’s pitching to contact and getting ground ball outs. He should continue that trend because the Giants have a good defense that knows how to handle its home park.

How’s Leake pitching lately? He’s got a 1.25 ERA over his last 5 starts. Opponents are batting .183 against him with no homers and 7 doubles. He’s averaging just over 5 strikeouts a game and walking about a batter every 9 innings. Leake’s worst start this season came in Cincinnati against the Giants back in May. That was the game Brandon Crawford hit his grand slam.

Acquiring Leake was a good trade for the Giants. He’s a free agent after this season and GM Bobby Evans has already said that Leake was going to be a guy the Giants pursued this offseason. Now they have 2, hopefully 3, months to sell him on San Francisco.

I think the largest compliment you can give a Giants move is that is was a Giantsy thing to do. This trade fits that definition perfectly.

Earlier today I wrote about how great the San Francisco Giants offense has been during their recent run of 11 wins in 12 games. Here’s some extra notes I picked up while digging around.

It’s a lot of fun to watch the San Francisco Giants offense these days. They’ve managed to hit their way back into a race for the NL West crown. After falling to 5.5 games back of the Dodgers on July 10th the Giants now sit 1 game back of their rivals. In the race for a Wild Card spot the Giants are 2.5 games ahead of the Cubs for the final slot. Pittsburgh holds the lead by 3 games for home field in the coin flip game.

As a result of being pretty much the best offense in baseball lately the Giants have won 11 of 12 games. If you want to push it a little further they have gone 12-2 since the return of Hunter Pence.

The offense just keeps going. The Giants are 1st in hits, batting average, and on base percentage in the NL. They are second in runs scored, and have the 3rd best on base + slugging percentage. Over the last 12 games the Giants are averaging 6.3 runs a game and 12.2 hits. My dad used to tell me you should average 2 hits for every run. His story checks out.

The guy going bananas right now is Buster Posey. During this 12 game stretch he’s batting .511 with an OPS of 1.066. He’s driven in 10 runs and scored 7. It just seems like he’s always on base. Posey doesn’t have any homers over this span but he hasn’t needed them. It looks like late 2012 without the power.

Angel Pagan has been a nice surprise in the leadoff spot during this run. He’s batting .315 and has scored 10 runs. With Nori Aoki coming back he’s made a bid to stay at the top of the lineup. For my two cents, I want to see Pagan dropped back down and allow Aoki to take the top spot in the order again.

It’s not the Pagan at bats leading off an inning or game that scare me. He has been pretty good at getting on base early. It’s the ones when he comes up with 2 outs and runners on that freak me out. And so often it seems like he swings at the first pitch in those situations. When Pagan works a count he’s usually trying to get an inning going. Maybe he thinks that every pitcher wants to throw a get me over pitch to start him off. I don’t know. I just know I want Aoki batting more than Pagan. Give me the guy with a .383 OBP which is second on the team behind Posey. Pagan has just a .304 OBP and that’s the worst of any regular player the Giants send out there.

Let’s go back to Hunter Pence. The first thing that jumps out is that the Giants are 30-8 in games he’s played. In those first 18 games he played between DL stints the Giants went 12-6, in the 14 games since Pence came back this time the team is 12-2.

Over the most recent 14 games Pence has driven in 15 runs. He’s homered 3 times, the most important one was in Arizona that tied the game right after the All-Star break. Pence is batting .321 since his return with an OPS of .948. In his first 18 games that was a .282 BA and .780 OPS. He’s also managed 5 doubles and that’s come primarily from Hunter’s right field approach. He’s been looking away recently and only turning on a pitch if it drifts to the inner half.

There’s also length in the lineup. Brandon Belt is 2nd in the NL with 26 doubles. That surprised me a little. Let’s not forget Brandon Crawford who shares the team lead in home runs (14) with Posey. These guys help keep the line moving after the top guys are getting on base.

I know this post is all about how kick ass the Giants offense is but I can’t let 2 pitching notes go by. First, I tip my cap to Tim Hudson. With the Giants 4-3 victory over the A’s on Sunday he’s now beaten all 30 MLB teams. He’s the 15th pitcher to do it. Hudson is the 4th one of those pitchers to spend time with San Francisco. The other three are Terry Mulholland, Barry Zito, and new Hall of Famer Randy Johnson.

The other great pitching note of late is the bullpen. Over the last 14 games Giants relievers have allowed 6 runs in 45.1 innings. A miniscule 1.19 ERA. They have a 2-0 record and are 7-for-7 in save chances.

The orange and black are streaking and tearing the cover off the ball in the process. The next 3 games are at home against the Brewers, a team they swept in 3 games while scoring 17 runs back in May at Miller Park. The Brewers are not scoring runs. They managed just 5 total this past weekend in 4 games at Arizona and were shut out each of the last 2 days. Hopefully this all means the Giants can keep up their winning ways the next 3 days at AT&T Park. 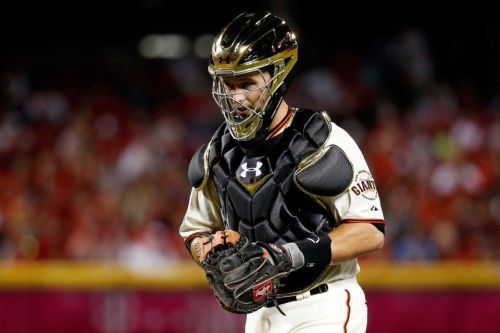 Much like Willie has his stream of consciousness posts after we cover a game in the press box, I’m going to share some thoughts and notes about the San Francisco Giants today.

There’s probably more to get into and I’ll be back later this week during the Giants off day Thursday with some more thoughts about the boys.

Listen to our “Bonusode” at Zeke’s here, stream it below!

Listen to our interview with All Star SS Brandon Crawford

Listen to our interview with Matt Duffy

Here we are again. Considering the struggles this team has had its amazing that the flag in right center is still hanging in the second position. If the rest of the west wasn’t so weak it wouldn’t be but we’ll take what we can get. Tonight’s an important game as the Giants are sitting at 43-43. Dipping below .500 can be a psychological blow and the Phillies aren’t exactly world beaters so a loss with your horse on the mound could be devestating. As the game goes on I’ll be noting my thoughts here for your enjoyment. Go Giants.

The Giants have been a streaky team this year, and this week is no different being mired in a seven game skid. Willie and Chad talk about the Giants recent struggles, injuries, the return of Cain and Peavy, and beat up on Don Mattingly. We also made ourselves feel better talking about the four Giants that were selected to the All Star game.