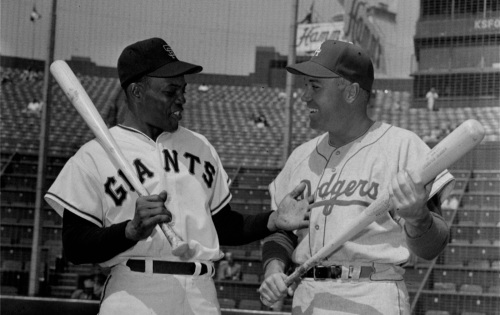 The San Francisco Giants were born during an owner’s vote on May 28, 1957. Well, they weren’t born, that distinction goes to expansion teams, more like they were allowed to exist on that May day in 1957. That day, NL owners approved the move of both the Giants and Brooklyn Dodgers out west to California.

That was the deal, though. Both teams had to move there, or neither did. Baseball wanted to keep travel problems to a minimum and having 2 teams out west made it easier for NL teams to schedule road trips. Airplane travel was just becoming normal, and before the 1958 season, there was no NL team west of the St. Louis Cardinals.

Yes, the Giants had won the World Series as recently as 1954, but attendance was lagging. In 1954, the Giants drew 1.155 million fans to the Polo Grounds. By 1956, that number had already dropped to 629,179. It was thought that fans were moving out to the suburbs and less likely to drive to the city for a ballgame. So the Giants looked to move out of the only city they ever called home.

It could have been Minneapolis. They could be the St. Paul Giants or the Minnesota Giants right now and you wouldn’t even be reading this post. No, you’d probably be a fan of the San Francisco Trolleys or something like that. The San Francisco Giants almost did not come to be. The owner of the Giants, Horace Stoneham first looked to Minneapolis as an option. Recently, the Braves had moved from Boston to Milwaukee and saw an obvious spike in attendance. And since the Giants already had a minor league team in Minneapolis, it seemed like the perfect fit.

On the other side of the rivalry, the Dodgers too saw declining attendance at their iconic home, Ebbets Field. The park was old and infrastructure was crumbling, and like the Giants, the Dodgers saw the future as suburban and were worried about fans traveling to games. First, the Dodgers looked at an option in their home borough of Brooklyn. They had a plan in place for the first domed baseball stadium to sit where the Barclays Center now sits, but the Dodgers were unable to secure the land underneath and that plan was scrapped.

Next, the Dodgers debated moving to Queens, where the Mets eventually ended up. Owner Walter O’Malley was not happy with this proposal and wanted his original Brooklyn ballpark idea to be the plan. So, with no other recourse, the Dodgers began to look around. In 1956, O’Malley had purchased the minor league Los Angeles Stars. Having seen baseball in that market, the Dodgers were set to move to LA.

The Giants announced the move during the regular season after the owner’s vote. For some reason, the Dodgers declined to make the same announcement until after the season. But as we’ve all learned, the teams were either moving to California together, or not at all.

Quick fun fact about that final game at the Polo Grounds on September 29, 1957. The fans rushed the field and tore up the grass and dirt and anything they could get their hands on to take home a piece of their beloved Giants. Among the crowd pulling some Polo Grounds grass off the field was a young Barry Nathanson. My father. He has since passed and his ashes are now scattered in McCovey Cove, so it came full circle for him. He took the Polo Grounds with him, but he’ll be with the Giants forever. I mean, how can I not be a Giants fan growing up with that man? Impossible.

Since the Dodgers didn’t announce the move until after the season, there was no such scene at Ebbets Field. The Dodgers just announced their intention to move to Los Angeles, and that was it. National League baseball in New York City was no more until the Mets came along in 1962 to fill the void. But what’s New York’s loss, was California’s gain.

And that leads us to this week in Giants history. On April 15, 1958, the Dodgers and Giants played the first ever Major League baseball game in California. Heck, it was the first game ever played on the west coast. I’m pretty sure this was the first MLB game west of Kansas City, as the A’s had been in Missouri since the start of the 1955 season.

The Giants first game in San Francisco was played at Seals Stadium before a crowd of 23,448. Candlestick Park had not been built yet. The Giants defeated the Dodgers 8-0 behind a Ruben Gomez 6-hit shutout. The first hit in California belongs to Charlie Neal of the Dodgers, who hit a single to lead off the top of the 2nd inning.

The first home run was hit by Giants SS Daryl Spencer in the 4th inning. Then it was 1958 Rookie of the Year Orlando Cepeda’s turn as he crushed his first career homer to CF in the bottom of the 5th inning. It was the first of 379 for the Baby Bull on his way to a Hall of Fame career. Cepeda was an instant hit in San Francisco.

Willie Mays contributed on the day, he drove in 2 runs with a 2-out single as part of a 6-run 4th inning for the Giants that knocked Dodgers starter Don Drysdale out of the game. Mays, 3B Jim Davenport, LF Jim King, and Gomez the Giants pitcher, all had 2 knocks on the day.

It was a successful start to California baseball, especially for the fans in San Francisco. The Giants would eventually finish 3rd in the NL with an 80-74 record, 44-33 at home. Attendance was over a million and did not drop below that level for 10 years. The Dodgers did not fare so well, finishing 71-83, 21 games back of the NL champion Milwaukee Braves.

Thank goodness the Giants survived another moving scare in 1992, this time to the Tampa Bay area. As we now know, Peter Magowan and others swooped in and kept the Giants in San Francisco while building a beautiful new ballpark. The Giants have recently won 3 championships by the bay and looking back, I can’t imagine it any other way.

If you missed it, here are the first 2 installments of TWIGH: Opening Day Timmy | Zito loves Coors

One response to “This Week In San Francisco Giants History: California Love”