Episode #162: At Least the Hitting was Better this Week? 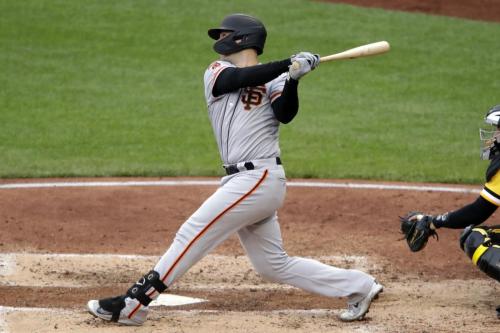 Buster Posey hits his first homerun since June of 2018 (237 ABs), which was also his first career HR against the Pirates. It was a 3 run HR that gave the Giants a 3-2 win. Photo by Gene S. Puskar

The Giants raised their team batting average over the last 6 games from .199 to .209. The bad news is that the Giants’ pitching staff ERA went from 2.75 to 3.22. Christian Yelich hit 8 homeruns…this week. The Giants have 13 homeruns…as a team….all season. Eric and Chad talk about a 2-4 week during this road trip, dropping 2 of 3 each to the Nats and Pirates. But, in almost every game, a single play was the difference. The Giants are, well…competitive. They truly are. A few hits here and there and the Giants could be .500 or better. They are not getting crushed. They just can’t win most of the close games, which is, well most of their games. At least Buster Posey won a game single-handedly with a 3 run jack to defeat the Pirates 3-2. He also applied the tag to Kang to record the final out at home that game. So, there’s that. But, that’s exactly what the Giants need. And more times than once every 23 games. Also, why can’t the Giants score in the first inning? They are dangerously close to setting the MLB record for not scoring the first to open the season. They are at 23, while the record is 28. Hell, why not? Who cares? BTW, they are hitting .096 in the first inning. All 7 hits are singles. I want to see them score that first first inning run via the little league homerun with like 7 errors on an infield hit.