This Week In San Francisco Giants History: The Comeback 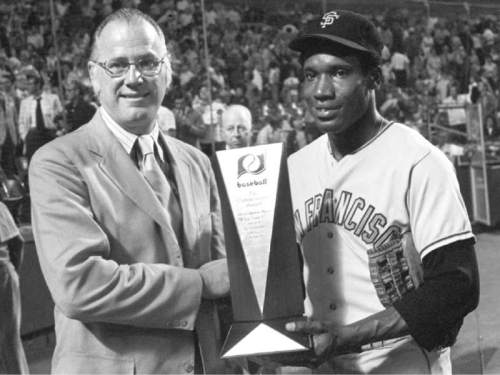 San Francisco Giants’ Bobby Bonds, right, and Baseball Commissioner Bowie Kuhn pose with the All Star Game Most Valuable Player trophy after it was presented to Bonds at Royals Stadium in Kansas City, Mo., on July 24, 1973. (AP Photo)

In the year 1973, the San Francisco Giants were facing a brave new world. It was the first season since 1954 in which Willie Mays was not on the roster. He had been traded to New York the prior season and was finishing his career out in a Mets uniform.

With Bobby Bonds in charge of a new outfield. the Giants had a good core of young players mixed with veterans like Willie McCovey to provide leadership and help the team contend. Twenty-three year old Garry Maddox patrolled center field, with 22-year old Rookie of the Year Gary Matthews spending most of his time in left field. A young Chris Speier, himself only 23 years old, was the captain of the infield at shortstop in only his 3rd season. McCovey was the only regular to get playing time who was over the age of 30 as the Giants gambled on young talent to carry them through the 1973 season.

The kids got off to a good start. The Giants entered May at 18-6, the best record in baseball. They held a 3.5 game lead over the Cincinnati Reds after 1 month in the season. Things were looking up for this young ball club and on May 1, the Pittsburgh Pirates came to town for the first game of a 3-game series.

Bob Moose, I swear that’s his name, was a 25-year old right hander who threw 6 complete games during the 1973 campaign. Over a 10-year career with the Pirates, Moose went 76-71 and had a 3.50 ERA. He had his good days and he had some bad ones. Moose entered his Tuesday night start at Candlestick Park with a 2.66 ERA and a 2-1 record, suffering his first defeat his last time out against the San Diego Padres.

In front of 7,972 fans at The Stick, the Pirates jumped out to a 3-0 lead in the top of the 1st inning against Giants starter Ron Bryant. The theme of this game was two-out hits, and all 3 Pirates runs were scored with 2 out. The rally was started with a two-out walk to Manny Sanguillen. Willie Stargell followed with his first of 3 hits on the day, a double to right field to give the Pirates an early lead. Bob Robertson and Richie Hebner each hit run scoring singles of their own before Bryant could get a gorund ball to end the first inning and keep the damage to 3 runs.

The Giants finally broke through against Moose in the bottom of the 5th inning. Gary Thomasson got the start in CF that night and he put the Giants on the board with 2 outs, hitting a solo shot. The Pirates added to their lead with single runs in the 7th, 8th, and 9th innings and the Giants were down 7-1 heading in to their final at bat.

I’m willing to bet there were fewer than the original 7,792 fans in attendance by the bottom of the 9th inning. For those that stayed, the Giants were about to reward them with the largest comeback in the history of the franchise. Based on WPA (Win Probability Added), the Giants had a zero percent chance at winning this baseball game. But baseball has a funny way of deciding what it wants to happen on a given day.

It didn’t start out in exciting fashion. Bonds led off the inning with a walk and was erased on a fielder’s choice hit into by Tito Fuentes. Chris Speier followed that by also grounding in to a fielder’s choice and the Giants were down to their final out with a runner on first base. Moose suddenly became unable to find the zone and walked McCovey and after him, Ed Goodson to load the bases. Pirates manager Bill Virdon had seen enough and he replaced Moose with left handed Ramon Hernandez.

Giants manager Charlie Fox countered the move, replacing left handed hitting Thomasson with the right handed Chris Arnold. Now, Arnold was no slugger. He was a utility middle infielder who was basically an all glove, no hit kind of player. The Giants just wanted to keep the line moving. Arnold had different ideas. He launched a grand slam off Hernandez to clear the bases and make it a 7-5 ball game. It was 1 of 4 career homers for Arnold, and was the only time he ever hit a pinch-hit home run. In fact, it was the only time in his career he homered after the 4th innning.

With the score now 7-5 and the bases empty, the Giants still had to put together a rally to win the game. As it was, the Arnold grand slam only improved their WPA odds up to 1%. Gary Matthews got the Giants going again with a double to left field. Then, much like his predecessor Moose, Hernandez lost the strike zone and walked Dave Rader and pinch hitter Jim Howarth to load the bases.

Again, Pirates manager Virdon had seen enough and he summoned veteran All Star pitcher Dave Giusti to end the mess. The Giants win percentage had risen to 13% as Bobby Bonds stepped to the plate for the second time that inning. Bonds ripped a double to left field that brought all 3 runs around to score and give the Giants an 8-7 victory. In Duane Kuiper speak, “THEY ALL SCORE!!!” It was the most improbable comeback in the history of the Giants according to statistics, and had to have been an amazing event for the handful of die hard fans who stuck around for the end.

The Giants got hits when they needed them by Arnold, Matthews, and Bonds, but the key to the inning was the Pirates pitcher’s inability to throw strikes and put the game away. In total, the Giants sent 10 men to the plate in the bottom of the 9th, and 5 of them reached base via walk. The Giants only needed a some well-timed hits to keep the inning going, and they got them at the right time.

Despite having such an improbable win under their belt, the Giants lost the next 2 games to Pittsburgh and 3 of 4 overall after the comeback win. The hot 18-6 start went by the wayside as the Giants played around .500 ball the rest of the season and finished with an 88-74 record, only good for 3rd place behind division winner Cincinnati. The kids were good, just not good enough.

And just for fun…

Honorable mention this week to the first game in franchise history. On May 1, 1883, the New York Gothams defeated the Boston Beaneaters 7-5 in their first game in the National League and our beloved franchise was born.

If you missed it, here are the first 4 installments of TWIGH: Opening Day Timmy | Zito Loves Coors | California Baseball Begins | Robby Hits For The Cycle

Chad had some great photos from 2007 when the Yankees last visited San Francisco.