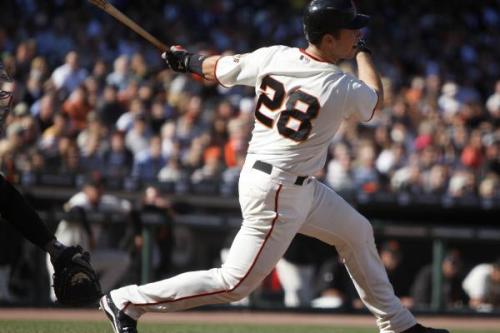 Well here we are. The 2015 San Francisco Giants season is upon us. I thought I’d take this time to preview the season and throw out some predictions. I’m sure you’ve read the “big boy” publications and what they forecast for the season so I’m not going to even mention the fact that none of them are giving the Giants a chance to do big things this season.

I previewed the starting rotation yesterday. Today I’m looking at the starting 8. Well, truthfully, it’s the starting 9. Even though Hunter Pence is out until sometime during April, I’m going to include him here. It’s not like he won’t be back and frankly we all love him.

So here are the starters. I’m not going to go by batting order because Bruce Bochy has already said that he will mix it up. Some days Angel Pagan will hit 3rd, others he’ll hit 5th. I’m going to go around the diamond starting with LF and ending with the catcher position. I’m choosing which stats from last season I want to highlight with each player because, well, I can do that. So sit back and enjoy a look at this year’s Giants starters. All slash lines are batting average, on base percentage, and then slugging percentage.

It looks like Aoki is the new leadoff man. He’s entering his 4th year in the league. Nori is 1 of 2 new starts for the Giants this season. If he’s going to be in that role I’d love to see those walks improve. After 2 years with the Brewers he was on the AL champion Royals last season. You may remember them. I’m not sold on his arm out in LF. In fact, “noodle arm” is a term I’ve used to describe him on multiple occasions throughout spring training. But he’s not here for his defense. Aoki rarely strikes out and can be a key if he shoots the gap towards triples alley. If he does that, he made lead the league in triples this season. END_OF_DOCUMENT_TOKEN_TO_BE_REPLACED