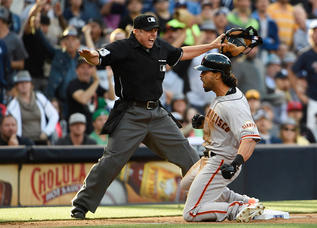 This isn’t a post about gum. Well, I guess it kind of is but I’ll get to that in a minute. Last night the San Francisco Giants and San Diego Padres renewed acquaintances for the first of nineteen meetings between the two clubs this season. During the offseason, and right up until the day before the season opened, the Padres overhauled their roster. There’s new faces everywhere. Matt Kemp came from LA, they added Wil Myers and Justin Upton. The new catcher is Derek Norris, you may remember him from his days across the bay.

It seems the Padres have gotten tired of Giants fans invading Petco Park and turing it in to “AT&T South”. I didn’t mind, neither did you I’m guessing. They’ve decided to try and win some games for the first time since 2010. That’s what last night felt like, 2010. This first game between the clubs was a nail-biter. The Giants finally won 1-0 in the 12th inning on a Justin Maxwell pinch-hit that drove home Brandon Crawford with the winning run. END_OF_DOCUMENT_TOKEN_TO_BE_REPLACED