The Friday Five: Life after Hunter 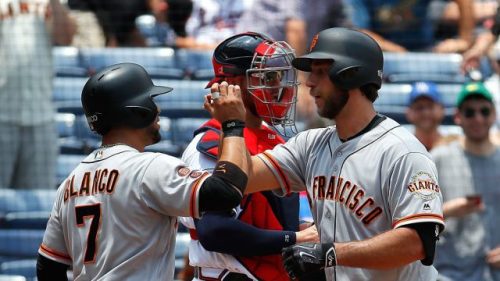 It’s been a rough week despite the San Francisco Giants going 4-3 over their first 7 games of this 10-game road trip. During Wednesday night’s game in Atlanta, Hunter Pence left the game with what is being called a “severly strained” hamstring. In typical Pence fashion, he smelled an infied hit as he sent a slow roller towards 3rd base and burst out of the box, but it didn’t end with a hit. Hunter pulled up, grabbed his right hamstring, and stopped.

He’s on the 15-day DL, and will probably be out for a while. Update: Pence is having surgery and will miss 2 months. Jarrett Parker got the start yesterday  and will probably split time with Mac Williamson, who was recalled from Sacramento. With Angel Pagan still on the shelf that makes the Giants play with a regular outfield of Gregor Blanco, Denard Span, and the Parker/Williamson combo. Just like we all were dreaming of back in March.

Anyway, losing Pence sucks, but gaining ground on the Dodgers doesn’t. The Giants are now 5.5 games ahead of their rival in LA. Yesterday was the first time in 12 days the Giants were able to expand their lead. During the previous 11 days the Giants and Dodgers had the exact same result, every day. So let’s poke around with this week’s, Friday Five.  END_OF_DOCUMENT_TOKEN_TO_BE_REPLACED

The San Francisco Giants are currently 25-18 and on an 8-game win streak. They lead the NL West by 3.5 games over both Colorado and LA. Will it last? Is this the team we were expecting? Well, kind of, but the pitching has been far better than imagined. So let’s take a look ahead to the weekend and back on the week that was in this edition of “The Friday Five”. Remember, I always look ahead before I look back. This is in case the Giants are struggling and I don’t want to focus on negative baseball things. Obviously, that’s not the case now.  END_OF_DOCUMENT_TOKEN_TO_BE_REPLACED

Are you ready for an old friend to drop in?  I am. This 5-game losing streak sucks and the San Francisco Giants could use some inspiration. The Giants are 7-10, barely ahead of the Padres for last place in the NL West. There’s six games left in this homestand, it’s time to kick it in to gear.

1) The Miami Marlins are coming to town for a 3-game series at AT&T Park this weekend. You may have heard, Barry Bonds is their hitting coach. It will be the first time Bonds ever steps foot in AT&T Park in an opposing uniform. It’s not going to be weird though, right? It’s going to make sense seeing Barry standing next to Don Mattingly in the visitor’s dugout wearing a Marlins uni. Sure, why not? Nope, still weird. It’s going to take an adjustment. More on Barry later. END_OF_DOCUMENT_TOKEN_TO_BE_REPLACED 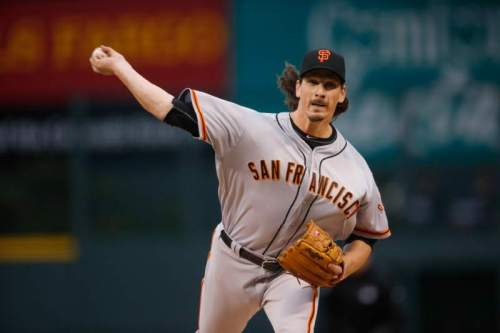 We’re through 10 games of the 2016 San Francisco Giants season and the team currently sits at 6-4. Right now it’s a tie atop the NL West with the Dodgers, who share the same 6-4 record. Although we all know that 3 of those 4 losses came at the hands of our guys in orange and black.

So let’s look ahead to the weekend and recap another week that was in The Friday Five.

1) It’s time for Giants-Dodgers part 2. The series kicks off with Madison Bumgarner vs Clayton Kershaw tonight at Dodger Stadium. Let’s hope this time Bumgarner and the bats don’t leave it up to the bullpen. Saturday night has Johnny Cueto vs Scott Kazmir. It appears that Cueto is all right after taking a tumble during the comeback victory over the Dodgers last week. END_OF_DOCUMENT_TOKEN_TO_BE_REPLACED