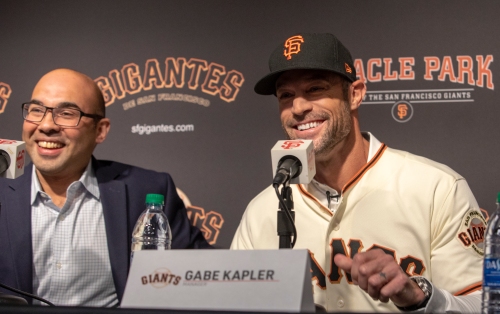 Spring Training starts this week for the San Francisco Giants so let’s dust off the old typewriter and dive in to a new season as Giants fans in the year 2020. Pitchers and catchers are reporting to spring training tomorrow with the first workouts of the year coming on Wednesday.

There’s been a ton of change within the Giants organization since this time last year. Gabe Kapler was hired as the new manager after Bruce Bochy retired following the 2019 season. Farhan Zaidi remains the VP of Baseball Operations and the man in charge, but he did hire a new General Manager with the addition of Scott Harris.

This is probably a good spot to mention Madison Bumgarner’s departure. The big left-hander signed a 5-year, $85 million contract with the division rival Arizona Diamondbacks. It was reported that the Giants did offer Bum a deal, but it was only for 4 years and he decided to make a change and sign down in the desert. He gets to have land for animals and all the space for things he enjoys. Good luck to Madison Bumgarner and his family. Thank you for everything.

The Giants will probably face him 4-5 times a year for the next 5 years, so, that will be interesting.

I mention Bumgarner now to get him out of the way. It’s time to look forward. As Giants fans, 2020 is a new adventure we haven’t embarked on in many years, if ever. The organizational outlook has changed, and it won’t be the Sabean/Bochy Giants anymore. We had a glimpse of the future last season with how Zaidi operates and turns over a roster, but now he’s got his guy in Kapler as the manager and full control over his whole staff.

Over the last 35 years, Giants fans have only seen 4 different men lean against the dugout rail and lead their team. Every one of those men cut a presence just by standing in a big league dugout. Can Gabe Kapler fill the shoes of Roger Craig, Dusty Baker, Felipe Alou, and Bruce Bochy?

It’s a whole new world and Farhan is just like Aladdin asking us to trust him.

There’s plenty of old faces returning to Scottsdale, it’s not an entirely new team. Buster Posey is still the catcher and captain of the ball club. Brandon Crawford and Brandon Belt return to their roles in the infield, and Johnny Cueto will be on the mound come Opening Day. Even old friends are back as Hunter Pence has signed a 1-year major league deal, and Pablo Sandoval is back on a minor deal with an invite to camp.

Pablo isn’t the only one with an invite to camp. By my quick math, there’s anywhere from 66-70 players invited to spring training in Scottsdale. There’s 26 spots on an active roster when the season starts.

Because there’s been so much change and new faces, we’re going to roll out a 2020 San Francisco Giants preview throughout the week as Spring Training gets under way. Tomorrow is the day Pitchers and Catchers report, so naturally, we’ll preview the pitchers and catchers in camp.

Wednesday will follow with the infielders, Thursday’s preview will be the Outfielders, and finally on Friday, we’ll wrap it up with a look at all the changes on the coaching staff and throughout the front office.

Keep coming back all week long to check the previews out and hang with us this season as we all experience this new era of San Francisco Giants baseball together. We’ll be recording episodes, covering games, and introducing some new exciting things for the upcoming 2020 baseball season.