Let’s Get This Party Started! 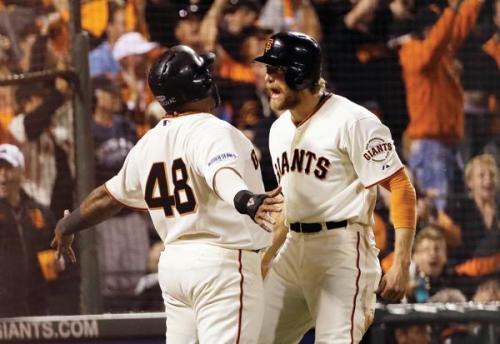 Opening Day is only 48 days away!

San Francisco Giants Opening Day is 48 short days away. That’s less than 7 weeks. Seven! Pitchers and catchers are reporting to Scottsdale next Wednesday the 13th, and full squad workouts start on Tuesday, February 19th. Cactus League play gets underway Saturday, February 23 in Tempe against the Angels.

There’s all your important dates for markers leading up to the season. The one I didn’t mention is Fan Fest, which kicks off this weekend at Oracle Park. Whoa. Typing “Oracle” instead of “AT&T” was a little weird there. Will get used to that.

Anyway, Fan Fest. That’s this weekend at Oracle Park. It’s usually the kick off point for any Giants baseball season. For the past few years, we here at TortureCast have been able to attend media day on the Friday before Fan Fest. Well, “we” is a loose term. Chad King always goes and sometimes Willie Dills joins him, but I’m way down here in southern Georgia so it’s not like I can hop in my car and drive over to join in on the fun. Due to unfortunate circumstances that ended up out of our control, we’re unable to make it to Media Day this season. Bummer, I know. But sometimes life throws you a curveball and you just have to go with the pitch.

Are you excited about the 2019 San Francisco Giants? I’m not. I’d say curious is the word I’d use to describe my outlook for this season. I can’t get excited just yet. There are so many unknowns at this point that it’s hard to project much. So let’s look back on the Giants offseason and take a look at where the club stands on the brink of their 20th season on the shores of McCovey Cove.

When the Giants brass fired Bobby Evans towards the end of last season, we weren’t sure which direction the team would go. The answer ended up being down the road in Los Angeles and the hated rival Dodgers. Farhan Zaidi helped build the last 2 NL Champions and was a part of 4 NL West winning clubs as GM of the smurfs. He becomes the Giants new President of Baseball Operations. Brian Sabean is still a VP, but it’s hard to tell exactly what kind of role he will have with the team.

Farhan Zaidi is a 42-year old Canadian-American who cut his teeth on the other side of the Bay with the A’s acting as the assistant general manager under Billy Beane from 2011 to 2014. He has a bachelor of science degree from MIT and a doctorate of philosophy (PhD) in economics from UC Berkeley.

From everything I have read and heard this offseason, Zaidi likes to build depth and have positional flexibility. He likes guys who can play all over the field. The Dodgers have a bunch of examples of this type of player, Bellinger or Hernandez come to mind, so I expect to see him seeking out the same type of players for the Giants moving forward.

I like the hire, and if you want to learn more about Farhan Zaidi, there’s a ton of articles out there from the past few months. He seems to be the kind of guy who can blend new and old school thinking and that bridge may be what the Giants need to succeed going forward in today’s MLB.

When you stink like the Giants have for the last 2 seasons, there’s bound to be some turnover on the roster. Say goodbye to Hunter Strickland, Gorkys Hernandez, Kelby Tomlinson, Derek Law, Gregor Blanco, and many others from the dying days of the Giants championship window. Zaidi is building depth and many of the Giants pieces from years past just don’t fit that mold anymore.

So far, the Giants have not made a big move or even addressed the outfield. In years past, this would terrify me but this year’s hot stove has been different. There are still a ton of players unsigned with less than a week to go until spring training gets under way. Usually when this happens it is because some high-priced free agent hasn’t signed yet to set the market for others. While I don’t think that’s totally the case, it would help baseball if Manny Machado and Bryce Harper were to finally sign with teams so we can all move forward.

It’s been reported that Zaidi, Bruce Bochy, and Larry Baer met with Bryce Harper in Las Vegas this past week. I am absolutely 100% on board with this move. Recently, Zaidi had said the Giants would be willing to circle back around to any players that remain unsigned, and the Giants are in desperate need of outfield help. So, yes, give me Harper. Imagine seeing him unleash that right arm from deep right field to throw a runner out at 3rd base, or cranking bombs into McCovey Cove. Just picture it.

It’s time to look past any grudges that may be held from Harper’s antics in years past. Yes he acted like a fool during the 2014 NLDS, but the Giants got the best revenge by winning that series and the whole freaking thing. And yes he tried to impale Hunter Strickland with his helmet, but who doesn’t want to do that? At this point, Giants fans would line up to chuck helmets at Strickland themselves. Could probably raise a lot of money for a good cause that way. Giants fans would come out in droves.

Back to Harper. This is where I point out he’s only 26 years old. It gets forgotten he made is MLB debut as a 19-year old. Nineteen! He was a baby. He’s had his growing pains over the years because he’s young. Who among us didn’t do stupid shit when we were younger? All of us. Nobody is the full-grown mature adult at 19 as they are at 30 or even 35. Yes, I would love for the Giants to sign Bryce Harper. Do I think it will happen? Well, I’m from Missouri, they’re going to have to show me.

Just going to leave this one nugget about Harper here before moving on. It’s just a fraction of how he helps a ballclub.

To all Giants fans who are looking at/worried about Bryce Harper’s batting average last season: Please look at OBP. Hitters are trying to not make outs. Harper was at .393 last season for OBP and that was a down year. Our qualified leaders in 2018: pic.twitter.com/7CeDL5GA2H

To be fair, the Giants have signed a few guys. Derek Holland will be back with team in 2019 after resurrecting his career last season. Zaidi also signed LHP Drew Pomeranz, most recently of the champion Red Sox, to a 1-year deal. He had a phenomenal 2017, posting a 3.32 ERA in 32 starts for the Sox in the tough AL East. Pomeranz can be a swing man like Holland and come out of the pen if needed, but I think the Giants signed him to start games. Last season was rough for Pomeranz who was injured early in the season and never seemed to be able to shake it. He is returning to the NL West having originally come up with the Rockies in 2011.

Other than those 2 guys, every other move has been about depth. The problem still lies in the outfield where Steven Duggar is the only one penciled in to a starting spot out there. If this team enters the season with an outfield of Mac Williamson, Duggar, and Austin Slater, it will be very disappointing.

Despite recent reports, Madison Bumgarner is still good. The lumberjack sized man hasn’t pitched a full season since 2016 due to dirt bikes and flying baseballs so at the moment we can just assume he’s healthy. He’s seen as the biggest trade chip for the Giants but for the moment they seem content to keep him on the club.

Will they trade Bumgarner at the deadline if he has a good first half but the team does not? Who knows? Zaidi has said he likes the current nucleus of Bumgarner, Buster Posey, and Brandon Crawford. He thinks they still have a shot to win with those core players. The key is surrounding them with other talent so those Giants legends don’t have to try to carry the team by themselves.

When it comes to Bumgarner, I’m torn. I love the guy and appreciate everything he has done to bring 3 titles to our favorite baseball team in the world. But, if the Giants are offered a deal for their future they can’t pass up, I would understand trading away our beloved Madison.

The bottom line is, enjoy every Madison Bumgarner start in a San Francisco Giants uniform that you can, you never know when it’s going to be his last one.

Just a few quick notes and you can get out of here and enjoy your weekend.

If you missed it, we came out of hibernation to record episode #157 last week. Maybe if the Giants give us something to talk about, we can record another episode. Until then, we do have a few shows on tap for spring training and then when the season starts we’ll be back to our weekly recording times.

We are so close to having the Giants back in our lives on an every day basis. Hold on, we’re almost there.