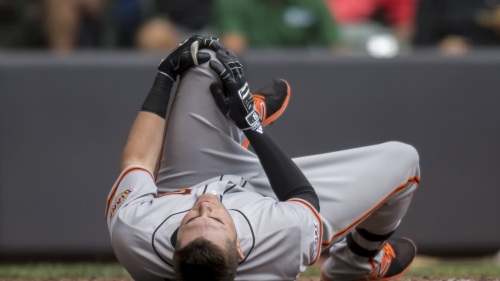 Ryder Jones dislocated his left patella on a swing. No one touched him. WTF? Yep, this encapsulates your 2018 Giants. Photo: Patrick Gorski-USA TODAY Sports

Yes, that show title is hyperbole. But, the Giants have lost 8 in a row, plunging them to 8 games under .500 and 11 games back in the West. They were swept in Colorado and Milwaukee, making it their first winless 6 game road trip since 2015. Although their pitching hasn’t been horrible, the pen and starting pitching is choosing bad spots to fail. Their hitting, or lack thereof, is the main culprit. The difference between their home (+9) and road (-17) records is astounding.

Ryder Jones going down for the season on a swing just encapsulates this injury-ridden season too well. MadBum, for all of his fire and fury, plunked Ryan Braun after their words earlier in the game, was met by a grand slam by Jonathan Schoop, the best retribution the Brewers could have asked for…and that’s after 3 of their players and manager were ejected for their reactions from the plunking.

With less than three weeks left in the season, the Giants will try and finish with some competitiveness, and hopefully be spoilers for a team or two. They will also try and avoid their longest losing streak in SF club history at 10 games (1996 and 1985). Hopefully it will never get to their overall club record at 13 games (1902 and 1944).

Thanks for the wonderful comments on YouTube, and hopefully you’ll root for this team as they close out this miserable season. Besides, football is back, and a good distraction, anyway.