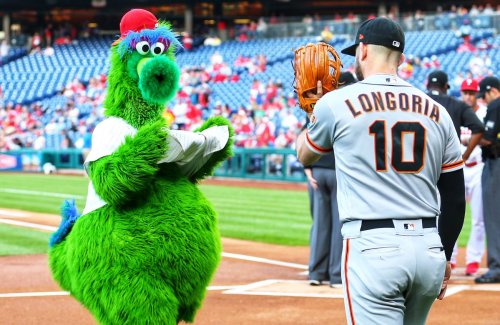 The San Francisco Giants are in a rut. After sweeping the Braves in Atlanta, the Giants lost 4-straight in Philadelphia to the Phillies. None of the games felt particularly close. The Giants were outscored 32-8 over the 4-game series, and generally looked like a team trying to hit the world’s best wiffle ball pitcher.

The Giants are back at the .500 mark, now 19-19 on the season. They are still in 3rd place, 5.5 games back of the first place DBacks and still 2.5 games up on fourth place LA. Currently, the Giants are on a 10-game road trip, and after starting 3-0, are now 3-4 after 7 games heading into Pittsburgh for Andrew McCutchen’s return.

The Giants looked like a team ready to roar through this entire trip. All 3 teams have winning records and this felt like a good measuring stick. To be honest, I’m not sure what to make of the past 7 games. The Giants played like 2 different teams in the 2 different cities and it’s hard to say which one is the real 2018 San Francisco Giants.

Over the course of the 4-games in Philadelphia, the Giants struck out a total of 55 times. The most K’s ever for the Giants during a 4-game series. The previous high was 44 back in 2003 when they had to face Arizona’s two-headed monster of Schilling and Johnson.

This was also the first time since May 27-30, 2008 the Giants struck out more than 10 times in 4-straight games. Here are the numbers. Take a sip of whiskey before reading further.

Then there is the current outfield rotation. Gorkys Hernandez (6 K’s) and Gregor Blanco (5) each got 3 starts in this series, and Austin Jackson continues to stay in the doghouse as he only got one start during the 4 games. Jackson struck out 3 times in 3 at bats in his only start and went 0-for-4 with 4 K’s and one walk overall in Philadelphia. Not good.

Buster Posey was not immune, on Tuesday he struck out twice for only his second multi-strikeout game of the season. Ok, that stat isn’t as bad as the others. Buster never strikes out a lot.

Do I have a solution for all the strikeouts? No. All I can offer is the Giants have to find some sort of middle ground between being patient at the plate, like they were the last weekend in Atlanta, and attacking pitches, like they tried and failed to do in Philadelphia. It’s there, we’ve seen this offense click before. It’s just hard to see it happening again when the Giants are in a slump.

A quick update on all the latest injury news. There’s been so much this year it’s hard to keep track of who is on what disabled list and when is someone allowed to return.

Madison Bumgarner- 60-day DL with fractured pinky. Threw off flat ground on Sunday from 90 feet. Should be starting minor league rehab soon and is eligible to return May 25.

Johnny Cueto- Has been transferred to 60-day DL with elbow inflammation. Saw Dr. James Andrews last week and surgery is not required. There’s a 6-8 week timetable on his return. If Cueto does make it back without surgery, it will probably be after the All-Star break.

Mac Williamson- On 10-day DL after being transferred from the 7-day concussion DL. He’s eligible to return this weekend in Pittsburgh but the Giants say it likely won’t happen until they are back home in San Francisco.

Mark Melancon- On 60-day DL with a flexor strain in his right elbow. Melancon has thrown 2 bullpens and is shooting for a return on May 25 when he is eligible to come off the DL. We’ll see.

Joe Panik- Had surgery on his thumb, out for 6 weeks, could return mid-June.

Hunter Pence- Has been on DL with a right thumb sprain. Pence played some rehab games but has been shut down again by the Giants. We’re still waiting to learn more about this.

It’s bad, but it’s not Dodgers bad. Although it may be time for the Giants to start looking for another starting pitcher. There is a lot on the shoulders of Ty Blach, Chris Stratton, and Andrew Suarez.  If one of those guys goes down, who knows where the Giants will end up.

Return of The Cutch

Andrew McCutchen will return to Pittsburgh this weekend to face his former club for the first time. There are tons of stories out there on this so I’m not going to waste our time. Cutch was the face off the Pittsburgh Pirates franchise for 10 years and helped them end a 20-year playoff drought. Of course his return is going to be big news.

I just wonder if the people in Pittsburgh hate the Giants because every time they get a franchise player, he ends up wearing orange and black later in his career. Barry Bonds did it, and now Andrew McCutchen.

Pitcher of the week

This could blow up in my face in a few hours, but I’m going with Andrew Suarez. On Sunday in Atlanta, Suarez pitched 5.1 innings and struck out 6. This wasn’t all about his numbers though.

In the first inning, Suarez ended up in trouble with base runners everywhere after an error by Alen Hanson extended the inning. Suarez worked around a walk and a single after that to limit the damage to 1 run and give the Giants a chance in the game. Suarez was poised throughout his start, didn’t deviate from his approach, and worked both sides of the plate with confidence.

Through 3 starts, Andrew Suarez looks like he belongs and I have already deemed his starts appointment viewing. The kid looks legit, let’s just hope he stays that way.

Player of the week

It’s Alen Hanson! We heard his name during the spring, but didn’t pay much attention. Then Joe Panik goes down and all of a sudden the Giants have a switch-hitting speedy guy with power producing for the big club.

During the 3-game sweep in Atlanta last weekend, Hanson had 2 hits in each game, drove in 5 runs, scored 3 runs, and was a general nuisance to the Braves pitchers. He showed athleticism on the base paths and great baseball instincts as he slid safely into home while avoiding a tag.

Hanson hit .429 over those 3 games in Atlanta and has hit safely in 8 of 12 games he’s played this season. The Giants are Hanson’s 3rd team and he’s only 25 years old. It’s possible this is the stop he figures it out. Or, the Giants just catch lightning in a bottle and can handle the blow of losing Panik. Either way, so far so good.

The Giants start a 3-game series in Pittsburgh tonight. After Sunday’s game, they get to fly home and end this 3-city road trip. The Pirates are surprising 21-16 so far this season, just a game back of the Cardinals in the NL Central. Remember, Sunday’s game is a 10:35 am start. So I’ll be over for breakfast and baseball.

When they Giants return to AT&T Park on Monday they face the lowly Reds and then see the Colorado Rockies for the first time this season. The Giants are still 10 games away from their next off day and are currently in a stretch of 17 straight games without an off day.

We’ll talk about this weekend’s Pirates series and look ahead to that home stand on Monday’s podcast episode.

Well, if you count watching our beloved Giants strike out 55 times in a 4-game series as torture, then that’s all we saw over the past week. It was so hard to watch at times that driving an ice pick through the eyeball to make it stop seemed like a reasonable solution. I watched every game of that series, even the Facebook debacle, and not once did it feel like the Giants could win any of those games.

Throw in Hunter Strickland’s inability to find the plate as he closed out the Braves on Sunday, and it’s been nothing but one long sustained torture chamber for days. The games haven’t been close, but the way the Giants are losing is soul crushing. The Phillies didn’t just beat the Giants, they bullied them, then kicked them while they were down, and then walked away like it was another day at the office.

Personally, my torture level is at a 10. I can’t keep watching the Giants strike out a bazillion times a game. It’s so boring. Put the ball in play, damnit. It’s so much more fun to watch.

Remember to subscribe to our podcast on iTunes, Stitcher, Spotify, PodBean, PodOMatic, and some other places I’m sure I am missing. Like us on Facebook, follow us on Twitter, and check out the YouTube channel which now has all new episodes as well as plenty of player interviews and much more.

Or you can just tell Alexa, “play the Torturecast podcast” and let her do the rest.