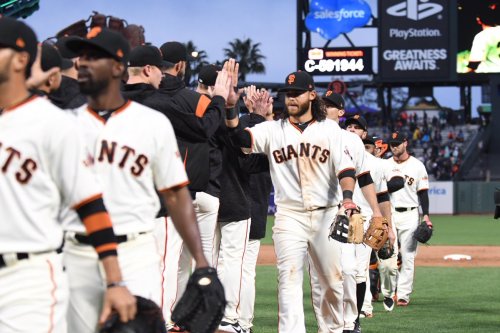 The 2018 baseball season is a week old. The San Francisco Giants are a respectable 3-3, good enough for 3rd place in the NL West. Not that standings really matter right now. It takes a month for things to really start shaking out.

Splitting 4 games in LA against the Dodgers to start the season was a great way to get things going. Yes, the offense didn’t really show up, except for Joe Panik, but getting a split against the defending NL champs in their park is a major win for a team who lost 98 games last season.

Just think about the way the Giants won the first 2 games. Identical 1-0 scores. With all the doubts about pitching heading into the season, the Giants threw 2 shutouts on the road to start the 2018 campaign. Between Ty Blach, Johnny Cueto, and the bullpen, the Giants didn’t even allow an extra-base hit. Only one Dodger reached 3rd base in either game, and in Cueto’s start, the only Dodger runner to reach base at all, Matt Kemp on a single, was immediately erased on a double play.

Can you remember a Giants team in the past to do that? I can’t. I looked it up, it’s never happened before.

This was the first time in Giants history the team opened the season with 2 shutouts on the road. All-time history, both New York and San Francisco. Think about all those pitchers in Giants history. Christy Matthewson, Carl Hubbel, Juan Marichal, Gaylord Perry, Jason Schmidt, Tim Lincecum, Matt Cain, Madison Bumgarner, the list goes on and on. None of them were part of 2 shutouts on the road to start a season. Mind-boggling.

The Giants have managed the back-to-back shut out feat to start a season once at home. In 1994, they shut out the Pittsburgh Pirates 8-0 and 2-0 to begin that season. That’s the only other time the NY/SF Giants have started a season with 2 shutouts.

Four other times in their SF history, have the Giants opened the season with back-to-back stellar pitching performances. Let’s see if you can spot the common thread.

And what did all those teams have in common? That’s right, they’re all playoff teams. Even the 1994 team I mentioned above was in contention, 3.5 games back, when the 1994 season was cut short by a player’s strike.

I’m not saying the 2018 Giants will make the playoffs, well yea, I kinda did say exactly that on the season preview show. Which you should still check out. Anyway, opening the season by shutting out the defending NL champs in back-to-back games is a good omen. I keep talking about how this team has a 2010 feel to it. Could be. But aybe I should calm down a little bit, it’s only been one week of baseball.

What’s up with the hitting?

Now here’s the flip side of those 1-0 victories. The Giants were shut out the next 2 days in LA, totaling only those 2 Joe Panik home runs as their entire offense. In fact, the first 3 runs scored by the Giants thiz season were all Panik home runs. He hit a solo shot on Tuesday against Seattle in the home opener. Later that game, Evan Longoria finally provided Panik some help, hitting a 2-run blast in the 7th inning of his first ever game at AT&T Park.

How are the new guys hitting after 1 week? The short answer is not too well if you just look at the stats. Longoria’ homer broke a 0-for-17 stretch to start the year. He’s now 1-for-19 with the homer, 6 K’s and zero walks. Andrew McCutchen has 2 hits in 24 at bats and has also struck out 6 times. Finally, Austin Jackson is hitting a robust .133, with 2 hits in 15 at bats.

It’s only one week, so that’s a small sample size. Cutch has shown the most life in his bat. He’s been hitting the ball hard,  but it just keeps finding a glove. I suspect Longoria will come back to his regular numbers. He’s in a new league, suddenly thrown in the middle of a completely new rivalry, in a home park he’d never stepped foot in until this February. He’s just getting his feet wet.

The Giants offense we witnessed in Wednesday’s 10-1 win over the Mariners is the best case scenario for this season. So remember, when you worry about the hitting, just know the Giants can put up runs in bunches.

Last season the Giants were dead last in home runs. Through a week of play, they are tied for 10th in baseball with 8 home runs.

Quick note, the Giants pitching staff has only allowed 1 home run this season. A wall scraper to Cody Bellinger on Sunday night. That’s tied for the fewest home runs allowed in baseball with the Cubs.

Pitcher of the Week

Cueto started 2 of the first 6 games for the Giants this season. They won them both. In his first start, Cueto took a perfect game into the 7th inning, and in his second, Cueto threw 6 innings of 1-run ball. He didn’t allow his first run of the season until that final inning against the Mariners.

So far, Cueto looks like the pitcher we saw in 2016 and not last season. The shimmy is back, and it is working.

Player of the Week

Was there any doubt? As we all know by now, Panik accounted for the only run in each of the Giants first 2 victories this season. He seems poised to wreak havoc at the top of the Giants batting order all season.

This weekend, the Dodgers come to San Francisco to renew the rivalry. Los Angeles is 2-5, having been swept by the Arizona Diamondbacks in Phoenix after the season opening split with the Giants. Friday’s game has already been canceled and will be made up later this month when LA comes to town again.

So that means it’s a 2-game series. Clyton Kershaw will face Chris Stratton on Sunday afternoon, so make sure to tune in if you can.

UPDATE: Bruce Bochy has changed the rotation to have Stratton pitch Saturday and Blach will face Kershaw again on Sunday. This way, when the fill-in starter for Jeff Samardzija finally takes the mound, it will be in the #3 spot in the rotation. Meaning, when Shark is healthy, he’ll just jump right into his #3 spot in the starting rotation and the Giants won’t have to make any more adjustments to the rotation until Bumgarner come back.

After that, the Diamondbacks come to town for a 3-game set. At the moment, they are tied with 2 other teams for the best record in baseball at 6-1. This was helped by the sweep of LA I just mentioned.

The Giants will have to call up either Tyler Beede or Andrew Suarez to face the DBacks next Wednesday. Thanks to the schedule, and now a rain out, that will be the first time this season the Giants need a 5th starter. My guess is it will be Beede because he’s already on the 40-man roster.

On a scale of 1-10, I would put the Giants 2018 at a 2 on the torture scale. They’ve managed to win games they weren’t supposed to and came out of the first week with a 3-3 record. It’s been said by many, if the Giants can stay around .500 until Jeff Samarzdija and Madison Bumgarner return, they should have a pretty good shot at the playoffs. So far, so good.

I hope you enjoyed what I am hoping to make a weekly column. We record our podcast on Monday to start the week, so I figured this way we can bookend the week with the Torture Report.

I was going to go a little ham and use all sorts of torture terms for this new column, but they just don’t sound the greatest in the context of baseball. So we’ll just keep it simple to start the season.

Remember to subscribe to our podcast on iTunes, Stitcher, Spotify, PodBean, PodOMatic, and some other places I’m sure I am missing. Like us on Facebook, follow us on Twitter, and check out the YouTube channel which now has all new episodes as well as plenty of player interviews and much more.