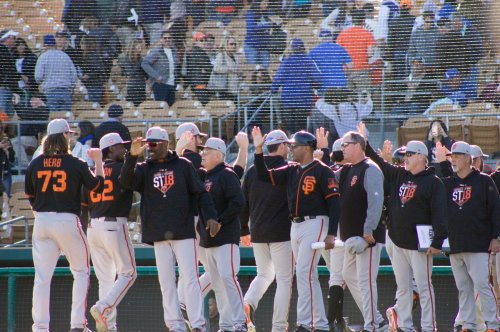 Every year, crazy things happen in spring training. Guys you’ve never heard of suddenly become home run monsters. Pitchers on the fringe somehow dominate. It’s a world of possibility, and any sort of craziness can happen.

Do you remember Mark Minicozzi? No? Neither do I. I had to ask a friend what his name was. He’s the guy who hit 5 home runs in Cactus League play in March of 2014. Remember now? Ya. I don’t either. And I was in Scottsdale that year.

That’s the point. Spring training stats don’t matter. Teams aren’t watching results. They search for players who have the swing to fit their ball club. Or are willing to take pitches when it’s called for and not just go up there hacking trying to prove their worth.

The Giants have some open competitions, but the roster is basically set. Pitching is still a question and we don’t know exactly who will man center field. So let’s look at some wacko things that might upset the apple cart this spring.

OK, maybe not every prediction is wild, but I am going out on a limb on a couple of these. Frankly, we have no idea what will happen, we rarely do, and that’s the fun in watching these battles play out during spring training.