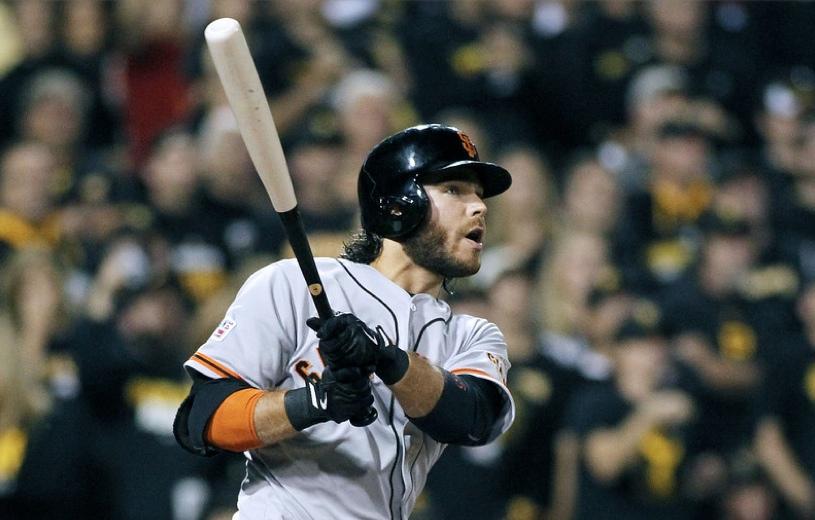 Brandon Crawford watches his grand slam sail over the right field fence in the 4th inning of the Giants’ 8-0 rout of the Pirates in the NL Wild Card game. (via Justin K. Aller of Getty Images)

The thing about parenthood and modern technology, is that we now have an obligation to put our children first before a Giants playoff game. Clearly parents didn’t do so before the age of the DVR. If I transport myself back to 1989 as a parent, I’m sure I could tell my wife that I couldn’t take our daughter to play rehearsal and our son to the park for some quality outside time because the Giants are playing the Cubs in the NLCS. When she responds, “just record it on the VCR,” I’d cooly respond with, “we only have our wedding tape here…no blanks!” Problem solved.

Well, not so much tonight. Despite the pit of despair that was wallowing in my soul at work as first pitch drew near, I did have fatherly duties to attend to, and my sidekick DVR could just suck up all the inning into its digital innards for viewing later. Of course, this meant that I had to cut myself off from the digital world and disable my MLB At Bat notifications as I ventured out into the natural environment and avoid eye contact from any other parent who might tell me the score.

So, I finally tuned into the game 90 minutes after first pitch, and although I didn’t get to enjoy Crawford’s grand slam live, it was live to me. Plus, I got to skip any annoying Viagra and insurance commercials to boot. Oh, and I also muted the TV because I couldn’t stand the Kruk (Jon, that is) and company. I watched baseball alone and in complete silence. Wait, is that a scene from “The Fan?”

Alas, I was overjoyed with the progress of the game, and eventually caught up to live when it was 7-0. I listened to Posey’s RBI single in the car as I picked up my daughter, and we both enjoyed a live viewing of the final 3 outs at home before putting the kids to bed.

The moral of the story: have your wife’s homemade shredded chicken tacos before you watch a DVR’d Giants game.

Oh, I forgot to mention that. They were epic, and may now become my rally enchiladas. With Cholula and crema, of course.

As far as the baseball game was concerned, Bumgarner was incredible. Willie, Ben and myself all predicted Giants wins, but with different shades of orange. I predicted a tight 4-3 nailbiter, Ben an extra-inning win, and Willie just about Nostradamus’d it: a 3-hit shout out by Bum. Well, it was a 4-hit shutout.

Aside from Bum’s dominant performance, and maybe it wouldn’t have mattered IF the Giants had faced Cole, but I think that was the key to the Pirates’ chances in this game. I can’t (can) blame Hurdle for using Cole on Sunday, with a chance to win the NL Central, but the Cards had Wainright going later against lowly Arizona, a low probability of the Cards losing that game.

Giants benefited from the NL Central race, IMHO. If the Giants had the same chance to with the West, we might have seen Bum go on Sunday instead of tonight.

And perhaps the result would have been different in that alternate universe.

That’s 8 consecutive playoff victories and 7 consecutive elimination game victories for the Giants. At some point those streaks have to end…

Or, just perhaps, this even-year-thing has some teeth.

Let’s hope they can earn a split in Washington and close it out at AT&T Park on Tuesday, but that’ll be a tall order against the best starting rotation in the bigs.

Oh, is Hunter Pence the man?