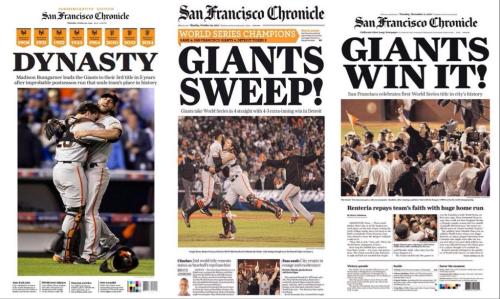 You’ll need to frame the third one, there on the left. Yeah, that one.

I really can’t write much. It’s been almost three hours since the impossible happened. Especially after that single-almost-turned-into-a-homerun took our collective breaths away.

But, Madison Bumgarner calmly stated, “I got this.”

After an improbable closing relief appearance, World Series MVP Madison Bumgarner earned the save with five innings of magical relief to preserve a 3-2 win over the Kansas City Royals that secured the Giants third World Series Championship in the last five years.

I really have no words.

And I need to SCUBA dive tomorrow.

Look for a giddy podcast sometime in the next day or two. I really have no idea what’s going on. A humpback whale might appear in the Mojave desert for all I care.

God dammit I love this game, this team, this City, and all of you fine people. And I’m not even drunk.