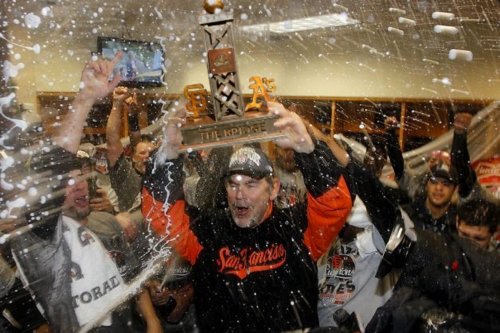 Bruce Bochy and gang take the Bay Bridge Series trophy in his 4,000th game managed on Sunday. They were apparently very happy with it.

After a sweep at the hands of the Cubs essentially eliminated any chance the Giants have of making the postseason, Evan Longoria had a great weekend against the A’s, enabling the Giants to take the Bay Bridge trophy and climb back to 4 games out of the wild card. But, if they had just taken one game in that crazy series against the Cubs, they’d be 2 out right now. With precious little time remaining, the Giants have to step on the gas…now!