The Horse Rides off into the Sunset 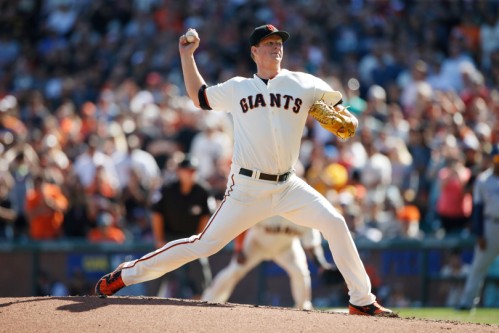 Under sun-drenched AT&T Park, Matt Cain made his final Major League start, all of them while wearing a Giants’ uniform. Undoubtedly, nerves were running full tension in his 6 foot-three frame, but he retired the first six Padres in order before giving up a lead-off single in the third.

After a four-pitch lead-off walk in the fifth, Bruce Bochy walked to the mound under a chorus of boos, but Cain had only given up two hits and one walk at that point, and although he was at the pitch count that Bochy had stated he’d exit on, he let Cain have the chance to finish the inning. He promptly retired the next three Padres in order and exited to a tremendous chorus of cheers from the fans. After receiving hugs and congratulations from Bochy and a few others, Cain came out onto the warning track and doffed his cap to the fans, reaching in every direction as he was bathed in a chorus of cheers and tears. After what seemed like an eternity, the ever-humble Cain went into the dugout to receive hugs from all of his teammates. Probably the most-memorable and tear-inducing moment was the bear hug that he received from Madison Bumgarner. Cain then took one last curtain call in front of the dugout before Hunter Pence lead off the bottom of the sixth.

Matt Cain served an incredibly faithful 13 years to the San Francisco Giants before announcing his retirement earlier this week. Bochy and management knew that he deserved this one last start, more than deserved. Although his last three years were plagued with injuries and a lack of performance, he didn’t disappoint in his last start, allowing no runs and only two hits and one walk in five innings.

The term getting “Cained” was coined early in his career. In our last post, we noted how he is at the bottom of pitchers with over 100 wins in terms of run support. He routinely lost games 1-0, 2-1, 3-2 despite his dominant pitching, which is why his losing career record is not indicative of the pitcher that he was. Although he’s not a Hall of Famer, he epitomized what it is to be a Giant. Sure enough, after his departure, Reyes Moronta allowed a two-out homerun to Wil Meyers to tie the score at one, and denying Cain of a win.

The Giants reclaimed the lead with a single by Pence, but the Padres opened up the bottom of the ninth with a squibber to Crawford, who threw it past Pablo at first base for a two-base error. A bloop put runners on the corners with one out, but Sam Dyson struck out Renfroe, and got Austin Hedges to an 0-2 count before grooving a pitch that Hedges split the outfielders with, putting the Padres up 3-2, their first lead of the entire game. With two outs. And down to their last strike. The Giants couldn’t muster a baserunner in the home half of the inning and limped out of the park with another crushing defeat, and Dyson’s second consecutive blown save (although an error and bloop really weren’t his fault).

Bochy reflected on Cain’s career in the post-gamer, and even jokingly offered that Cain could manage tomorrow because he’s “not done very well this year.” Instead of being interviewed in the clubhouse, the Giants put Cain out on the podium in the press room. Bochy revealed that the team had a private moment and a toast to Cain just after the game and prior to their pressers.

Cain was candid and honest in reflecting upon his career, even commenting on how he smiled when he realized that Ted Barrett, the home plate umpire from his perfect game, was behind the dish today. He was surprised that he made it a full five innings considering that he hadn’t pitched in a month, but after his four-pitch walk to lead off the fifth, he talked with Bochy realizing that he didn’t want to go out on a four-pitch walk. He summoned what was left, and with two outs and two strikes, he dropped a curve on the opposing pitcher, mostly because he was “out of gas.” That weak grounder to Crawford officially ended his career before doffing his cap.

Cain said that he “fulfilled everything he could think of from a career.” He wants to be with the Giants in some capacity next year, but he needs to take some time with his family and decompress before looking at his options.

Bochy ended his presser talking about Cain’s nickname saying, “his nickname is the ‘Horse’ for a good reason because we were riding him hard.”

After Cain’s presser, it was a pleasure to actually shake his hand thank him in person, a rare occurrence between press and athletes, but he had just thanked the press (sarcastically or not) for the relationship over the years. So, as the “Horse” rides off into the sunset, I think we all would just like to say thanks, Cainer, you’re a true Giant.