What’s good with the Giants? 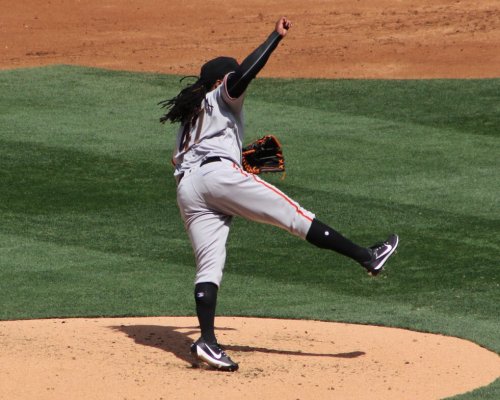 We here at TortureCast often talk about breaking down the Giants season into smaller segments. At the start of play today, the San Francisco Nine have played 16 games, 1/10th of their season total. So I decided now is a good time to check in and see how things are going.

The Giants are 6-10 after splitting two games during their Kansas City memories tour. All alone in last place, one measly half game behind the San Diego Padres. This weekend, the Giants will try to get out of the cellar in the house of horrors known as Coors Field with three games against the Rockies.

Every couple of weeks or so I’ll be back to check in after each tenth of the season. I figure that’s long enough to space them out so I can make sure I’ll stay on it. If I could write every day, believe me, I would. So, riffing off my old “3 up, 3 down” format, here’s some observations about the 2017 San Francisco Giants.

Johnny Cueto- Over his first 3 starts, nothing has fazed the Dominican right-hander. I suppose that comes with having run support, but that’s not his department. Anyway, Cueto has looked in complete command during all 3 of his victories. His shimmy and shake routine is working, but so are his pitches. Part of what makes Cueto so good is his ability to produce outs when needed. He is willing to pitch to contact and allow the guys behind him to take care of it. Johnny tries to control which direction the ball is hit, similar to Greg Maddux. He will allow a run here or there, as evidenced by the 3.79 ERA, but doesn’t get burned by the big inning.

The Bullpen- Surprise! The bullpen doesn’t suck after all. It was a rocky first week there in Arizona and San Diego, but things have settled down since then. Here’s some fun facts about the Giants bullpen. Collectively, they have a 3.35 ERA in 40 innings pitched. The pen has struck out 39 guys, about 1 an inning, but they have allowed 16 free passes. Derek Law gave up the only home run surrendered this season by the pen. That’s it, just one. Hunter Strickland hasn’t allowed a run yet in 5.2 innings pitched, neither has Corey Gearrin in his 4 innings. I haven’t even mentioned new closer Mark Melancon, who converted his last 3 save opportunities after the Opening Day hiccup. As you can see, the bullpen has been pretty good.

Joe Panik- He’s the only regular in the Giants lineup not named Buster Posey batting .300 or higher. Panik has started 15 of the first 16 games, and already has been in 4 different spots in the batting lineup. He led off once, hit second a couple of times, but has mostly batted 7th and 8th. While I do wish we could see him at the top of the lineup more often, his results show why he’s been hitting lower. It’s to lengthen the lineup, and frankly, the Giants will take any offense they can get. It worked in KC the other night as Panik scored one run, and drove in the other during the Giants 2-1 extra inning victory.

What’s Not So Good?

Injuries- Posey getting drilled in the melon could have had a bigger impact on the team than it did. He took a week off and seemed to swing a good bat as the DH in Kansas City. We’ll see how he fares with all the nicks and tips a catcher takes. Jarrett Parker fought the left field wall at AT&T Park and lost. He’ll be out for months and it will be up to someone else to try to take control of that spot in the outfield. Don’t forget about Denard Span’s hip balking at him early on. He’s had a rough start, batting just .205 with a .255 OBP.

Leadoff Man- As a result of Span’s struggles and missed time, the top of the lineup has been a black hole. It doesn’t matter if it’s him, Gorkys Hernandez, or even Aaron Hill (wtf?), nobody is getting on base at the top and putting pressure on the other team. San Francisco leadoff men are batting .194 and getting on base at a .260 clip. The worst spot in the order other than pitchers and where the random guy playing LF hits. A grand total of 6 walks have been earned from the one hole in 73 plate appearances, that’s 1 less walk than the eight place hitter who has been to the plate 13 fewer times. The Giants need someone to make some noise before the big hitters get up to the plate.

Runs For Bum- Where are they? Why can’t the Giants score for Madison Bumgarner? Is he the new Matt Cain, but like an even better version? In his last 3 starts Bumagrner has yielded a total of 6 runs in 20 innings while the offense has scored 1 run during that time. Even then it was too little too late in San Diego. I don’t know what to make of this and just hope it goes away, soon. The Giants can’t afford to keep losing games started by their ace.

As I mentioned above, the Giants are in Colorado for 3 games this weekend. They will try to get some revenge on Tyler Chatwood after he shut the Giants out at AT&T Park last Saturday. After this weekend’s attempts at revenge, an old rival comes to AT&T Park on Monday for a 4-game series. Matt Cain faces LA in the first of 19 games the teams will play this season. I said it on the podcast this past week, and I’ll say it on the next one, I like how the Giants starters are lined up for the Dodgers series. Cain has pitched beyond expectations and then follow that with the top guys. It should be a fun week. The Giants will close out April with 3 against the Padres at home before heading out on a 10-day, 3-city road trip to start May. But we’ll cover that as it comes.

Thanks for humoring me in my foray back into getting some words up here. We’ll be back with another podcast at the beginning of next week and all season long. Subscribe! Leave us good reviews and stuff! Remember to like us on Facebook, follow on Twitter, and check out the Youtube channel.