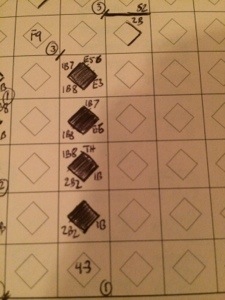 I’ve mentioned it on the podcast before, but I’m pretty sure I’m certifiably nuts.  While I’ve mentioned it in general, in this case I’m specifically talking about my goal to try and score every single game the Giants play this year.  Am I going to succeed? Who knows — I may give up and decide I prefer sleeping at some point (I closed at work today, and it’s nearly 3 AM now that I’m finishing this), but in the meantime, I’m learning a lot about the sweet art that is scoring and how being engaged in a game changes the way that I consume and follow it.  And along the way, you always come up with a few interesting tidbits, so at the conclusion of the series, in parallel to our new series reviews, here’s a few things that I couldn’t help noticing over the course of our opening series at Chase Field!

Disclaimer: All observations are based on my own scorecards and note-taking. There will be errors. Feel free to point them out in the comments and I’ll swing back around to correct stats and things in the future if I can.

These observations will only get worse as time goes on (we’ll see how many useful bits of information I can pull out of a mid-July three-game series against the Marlins without coffee), but hopefully, I’ll be able to share some of the tips and tricks I pick up scoring as we go. I’ll post some of my terrible, terrible scorecards in the next couple days.  If you have pro tips on scoring baseball games or interesting personal quirks that make tracking games easier for you, mention them and let’s discuss!