Episode #155: Coming Down the Stretch 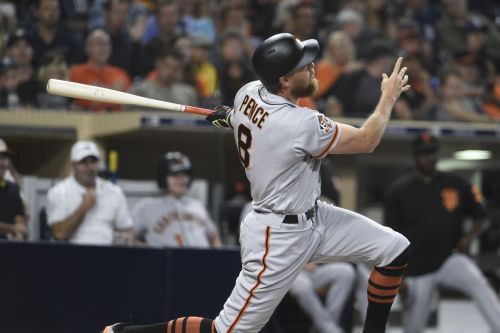 Hunter Pence watches a mammoth homerun sail to the warehouse at Petco Park. It may have been his last in a Giants uniform, but he certainly played his last road game with the Giants in St. Louis over the weekend. Photo by Denis Poroy/Getty Images

The Giants finished their abysmal road record at 31-50 after losing their final four roadies (1 in SD, 3 in StL). It marks only the 6th time the Giants have lost 50 or more games on the road and the first time they’ve done that in consecutive seasons since 1984-85. At least they’re guaranteed of a winning home record (they are standing at 41 wins).

Eric and Chad review the week on the road, a monumental bomb off the bat of Hunter Pence, the possibility that GM Bobby Evans might be replaced and what a new GM might do (trade Bumgarner?), Melancon’s struggles, our picks for the Willie Mac award, review the current playoff situation and pray and hope that the Giants can knock LA out of the playoffs this coming weekend as both teams close out the regular season.

We’ll be back next week to wrap up the season and preview the playoffs. Until then, be sure to like us on Facebook and follow us @TortureCast.